How Might Failure to Wear a Helmet Affect a Motorcycle Injury Claim? 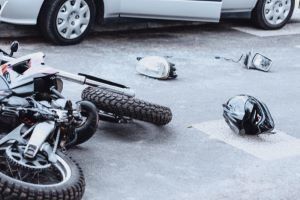 Being injured in a road accident is always a traumatic experience. But motorcyclists, with less protection than occupants of other vehicles, are at a much greater risk of serious injury and death. If you are hurt while riding and someone else is at least partially responsible for the accident, you can seek compensation for medical expenses, lost wages, pain and suffering and more. This claim can be more difficult if you weren’t wearing a helmet, but that doesn’t mean it’s impossible.

In New York, all motorcyclists are required to wear helmets while operating their vehicles. An individual who is riding without a helmet may be seen as negligent in not following the rules of the road. This does not mean he or she will be found more at fault than other drivers in causing an accident, but it does mean that the injuries may have been worsened by the lack of protective headgear. You can still bring a civil suit against another driver, but your recoverable damages may be limited.

If you are partially at fault for an accident in New York or for the resulting injuries, your awarded compensation will be reduced by your percentage of fault. If you weren’t wearing a helmet, the defendant will almost certainly argue that your injuries were caused or significantly increased by the lack of one. However, your attorney can make the argument that a helmet wouldn’t have substantially prevented the injuries you sustained. For example, a helmet would have no effect on whether you broke an arm, a leg or even ribs or backbones. Except for damages relating to head, brain or spinal injuries, you may be able to overcome the fact that you weren’t wearing a helmet and recover full compensation.

It’s important to keep in mind that most personal injury cases settle before going to trial. If you weren’t wearing a helmet, any settlement offer from the defense attorneys will be significantly less than if you were wearing one. They will assume that if the case goes to trial, they can put most of the responsibility for the accident and resulting injuries on you, since juries often view motorcyclists as more likely to take risks and to ride recklessly. Nevertheless, through careful preparation of evidence, a fair and adequate settlement can usually be achieved.

If you were injured in a motorcycle accident, even while not wearing a helmet, you should not give up on your right to seek compensation. The attorneys at Goldberg Sager & Associates in Brooklyn have decades of experience pursuing successful motorcycle accident claims. Contact us today by calling 718-514-9516 or by contacting us online.